When The Zombie Apocalypse Comes, You Should Wash Your Hands

“Preparedness 101: Zombie Apocalypse” – No, this isn’t an episode on a late-night History Channel show – this is an actual statement released by the CDC. For years the CDC has been trying to get people to listen to warnings regarding emergencies, like hurricanes, pandemics, and more. Surprisingly, the general guidelines stand their ground throughout different emergencies. “Get a kit, make a plan, be prepared,” says one of their (unsettling) posters. 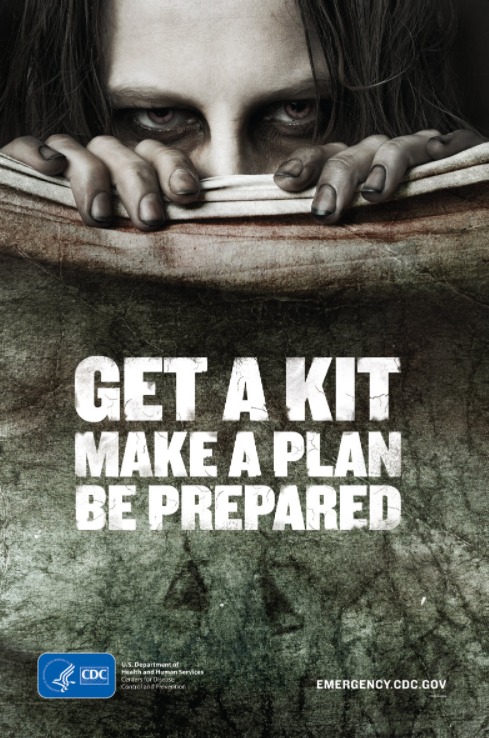 Someone at CDC had the bright idea to utilize pop culture references to get people’s attention – like zombies. Truth be told, the CDC makes it abundantly clear that they are, in fact, not anticipating a zombie outbreak to occur, however, they are making use of this popularly imagined scenario to teach people how to react in the face of a real-life emergency. Zombies, in this case, are interchangeable with natural disasters or fast-growing pandemics. The CDC wanted to paint a picture where utilities are not working and people need to survive and find their way to an evacuation center.

In case a zombie apocalypse does break out, officials clarify, the CDC will follow the procedure as they would with any other disease outbreak: conducting an investigation aimed to identify what causes the illness, what is the source of the infection, how it is transmitted and how contagious it is, and of course – how to break the cycle of transmission. The CDC will also be assisting cities and states with lab testing and analysis, patient management, infection control through isolation and quarantine, and more.

What do we know about zombies?

Zombie is a Haitian word for a corpse reanimated by magic. This word got further meaning in voodoo practices from New-Orleans. Historically speaking, different cultures have talked about zombies for centuries. There are actually several words for it in Kongo (nzambi, zumbi, nzumbi) all centering around the notion that a soul of a dead person remains on Earth torment the living. The CDC defined zombies as “a human corpse mysteriously reanimated to serve the undead”. Yikes!

The originally Haitian word was given a western perspective through popular media in the second half of the 20th century. Films, such as Night of the living dead (1968), became cult – no pun intended. Video games such as Resident Evil cemented this newly found archetype of western zombies. Zombies became increasingly popular and more and more films, books, and video games featuring them started becoming popular.

In the early 2000s, zombies were given more humane depictions, caricatured as a minority group living with an incurable (but manageable) illness, struggling for equality and acceptance. Several novels published at the time began placing zombies as love interests and friends for their human counterparts. What do zombies have to do with hand hygiene?

That, my friend, is a great question. Most western depictions of zombies have moved far away from their Haitian origins, where magic is involved. The western “take” on zombies is that zombies are created through an infectious virus. And you guessed it – exposure to bodily fluids is one of the ways to become infected with the imaginary disease. It’s true that everyone thinks of the classic zombie bite, but that is only one way to be exposed to the infected fluids (zombie saliva. Shudder.).

Those who take zombies a little more seriously hypothesize that the condition might actually come to life in the future, through a mutation of known illnesses such as mad cow disease, rabies, and so on.

So if a zombie pandemic were to ever take place, we would all probably carry around face masks and wash our hands as often as we could to avoid exposing our bodies to the virus. Because there is no sure way of knowing if the fictional virus reacts to hand sanitizer well or not, we’re going to recommend sticking to good old handwashing to avoid becoming a zombie. Of course, automatic handwashing machines are the best way to wash hands – whether we’re talking about real or fictional germs.